Over the weekend I was given the opportunity to photograph the lovely Rianna Kristine of Corpus Christi, Texas. I was traveling in the area to visit family and set up a couple of photo shoots. Unfortunately, the other photo shoot was a cosplay, but my friend had an unfortunate illness in his family. We are rescheduling for the winter, because both of us really want to make this photo shoot happen.

But, on to Rianna. She was a brilliant model and knew how to pose herself. She has a keen sense of fashion and a good sense of humor. She was a pleasure to work with and I hope the photos do her justice to how pretty she is in real life. She knows her modeling angles and understands how to be in front of a camera. These are some of her photos.

I will say that Corpus Christi, Texas has a number of great locations to shoot at. We decided to settle in at the Bayfront near the Water Garden and museums. We did some shooting at the Water Garden before the sun became to harsh. Normally I don’t shoot during the day, it’s not my style, but since I had other obligations during the nights I was in town, I had to settle for the light.

The Water Garden is one of the original attractions, Corpus Christi has and it is basically a circular garden with steps scaling down creating a waterfall. I had to yell a good amount to make sure she heard directions over the rushing water. My lovely assistant and fiance, Teresa Miles also helped me out in communicating to her avast the water thundering over the steps.

After the Water Gardens, we moved to the Historic Village. And no, we did not see any ghosts. We did look and some of the houses did look creepy enough to have some around. These houses are over hundreds of years old and they have survived multiple hurricanes. We did two different outfit changes here including a skirt combo and jean short combo. The old style housing gave us a lot of material to use for a photo shoot. We really didn’t have to go to another place, because there was plenty of stuff to keep the creativity juices flowing.

I will say the harsh sun started to pound on us as the photo shoot went on, and we tried to incorporate more shade. Plus, I was using a strobe with a silver umbrella to take out the shadows. It was sure hot on the umbrella. I accidentally touched it while I was backing up and it seared my skin. Didn’t know if was catching that much light on it from the sun. Also, I had Teresa hold a diffusing reflector near her face to keep the sun out of her face, but still have a natural feel. A diffuser is one of the most underrated pieces of equipment a photographer has.

All in all, it was a great shoot, and I enjoyed working with Rianna. I will be shooting again this week, so look for more pictures soon. Of course, this is busy time of the year for me, so you will be seeing more work-related photography from now on. But, I will be squeezing some personal projects when I have the time. Let me know what you think in the comments. 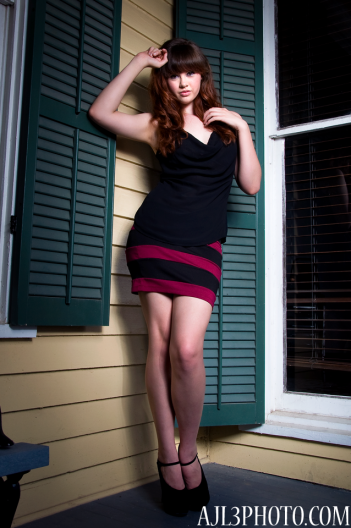 As May roles around, so do senior photo shoots. This one particular was with the lovely Monique Lockwood. She will soon be leaving for the Air Force, so we set up this photo shoot quickly to make sure she has her photos before she shipped out. She is a senior at Angelo State University and will be graduating soon.

Monique has helped me throughout the years hone my photography skills by being a stand-in at all times of the day and dressing up a lot! We joke about all the outfits she has, and that there is always something new for me to shoot. So when she asked me to do her senior portraits, I could in no way turn her down.

Like old times, this was a fun shoot with some great pictures. Ironically I think these were some of my best photos. I know how she works and she knows my style and what I look for in taking pictures. Plus, she has helped me create a style that I am glad to use in future photo shoots.

Of course, we did these in San Angelo, where she and I both go to school at Angelo State University. She has been photographed in most places in San Angelo because of me. So we decided to try some locations that are finally open after a lot of restoration. One of those was the historic village. The above photo is part of the small historic village near the San Angelo Museum of Fine Arts.

We also went further into Downtown San Angelo to the newly remodeled City Hall. It was nice and no one was around, so we had the whole place to ourselves.

One good thing about Monique, is that she always has ideas, and I’m always open to trying anything new. We tried doing some bubble shots, but those didn’t turn out as well as we would have liked. I did learn some techniques from that, so I may have to try it again in the future. But, I think the harsh sunlight didn’t help us in giving us a good reflection on the bubbles.

The harsh sunlight can be unforgiving, but it wasn’t new to me in photos, but it wasn’t easy either. For most of the day we had been shooting in harsh sunlight. It was actually around noon when we had this photo shoot. Normally I shy away from this time all together, and most photographers I know will not even attempt to shoot during these hours, but our schedules were so scattered that this was the best time for both of us. So we both had to make it work and I like to say we succeeded. These are only a few of my pictures from the photo shoot, but there were a lot I liked from this set.

One of my favorite pictures from the photo shoot is the one to the top left, with Monique in her beautiful blue dress and graduation cap against the giant ASU sign at the university. I used a strobe on this shot angled from the top. The strobe took out most of the sunlight and left an even glow. Also, the tree shading helped immensely too.

While, I won’t be shooting with her for a long time as she will now be fighting for our country, I’m glad to have known her and share with her in my growth as a photographer. I hope all the best in the world to you Monique, and look forward to the day I can one day take your picture again.